Our Neighbour, the American Robin is the second of a two-panel painting (also known as a diptych). Created using oil paints on a 18″x24″ canvas, this piece took me about 1 week complete. And since this is the second panel, I started off by drawing a rough sketch of the Robin’s nest just so that I have an idea of its placement in relation to the subject in the first panel.

After observing robins for a few years, I’ve come to appreciate how resourceful they are. For example, the nest depicted in this painting was built on the downspout of my neighbour’s house and stood intact for four years – until the home owner finally decided to take it down after it was abandoned. I’ve seen this nest withstand wind gusts of up to 90 km/h and weathered many storms – while the female robin was sitting on it! Each year a robin returned, she would add new twigs, and grass to it, in preparation to lay her eggs. After the babies have hatched and left the nest, sparrows would take bits and pieces from it to build their own. I’ve seen three generations of robins hatch in this nest and was I amazed with each experience.

If you want to see how I painted the first panel, check out my previous video. 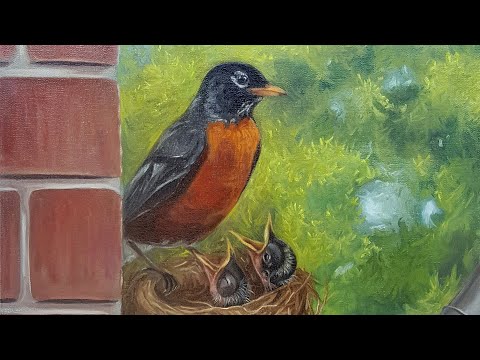